Lately we faced a challenge. We needed to create future personas, based on children currently aged 10.

We researched megatrends but soon we realized that we were lacking essential knowledge. Knowledge we could only get when speaking with actual kids. In order to create future personas, we needed to understand the children’s interests, motivations and dreams. Where would they want to travel? Who are their heroes? What are the things they cannot live without? What are their goals in life?

Right from the start we knew that shooting these complex and abstract questions at them would not be very effective. To make it more accessible we expected storytelling to be more successful. Storytelling would not just give us a form to hide our questions but it would also help the kids to formulate their answers.

Storytelling would not just give us a form to hide our questions but it would also help the kids to formulate their answers.

Unfortunately we faced many practical challenges. The project lasted only one week and just getting the parents’ permissions would take us longer. Besides that there was a language barrier which was difficult to overcome.How could we gain a richer understanding of these kids without the possibility to talk to them?

We looked for a form which we could spread on schools without losing the richness we aimed for. We ended up making an open-ended comic.

We looked for a form which we could spread on schools without losing the richness we aimed for. We ended up making an open-ended comic.

Comics are fun, accessible and immersive. In design, they are usually being used to communicate difficult ideas or concepts. Our intended usage was quite different. We aimed to use a comic to collect ideas, as a form of remote co-creation.

The biggest design challenge was to gain the maximum amount of user data without neglecting the story. One way of achieving this was through the use of metaphors. Kids filled in fictional passports, packed their bags and created a flight ticket. These elements contributed to the story and meanwhile we got our data. 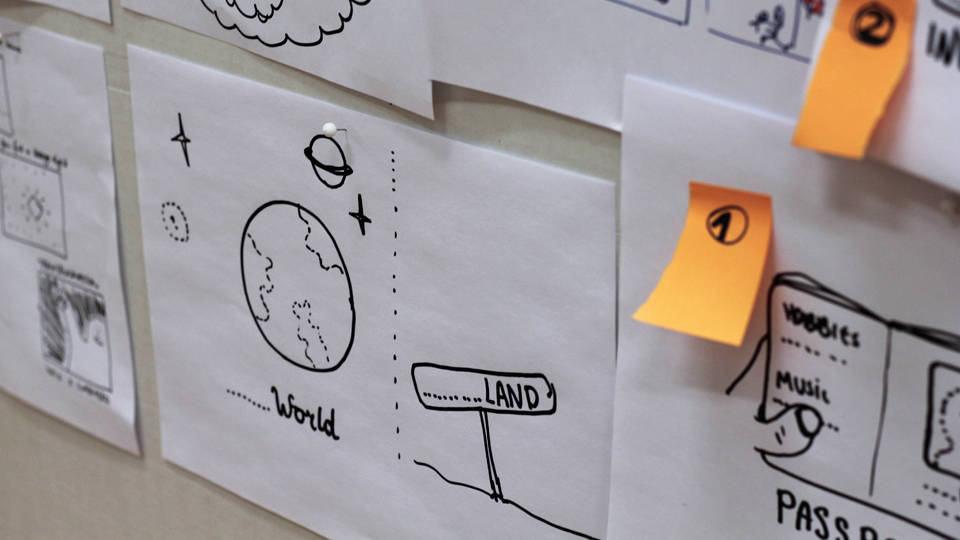 Another challenge was to find the right level of openness. The more freedom we would give the kids, the more uncertainty we got about the storyline. This would make it harder to guide the kids, causing potential confusion. We tried to solve this by having a transition from closed to open during the story. In the beginning of the story, kids can just fill in one word. Halfway, the kids can choose from a set of predefined options. Finally, the last page is totally open to the children’s imagination. 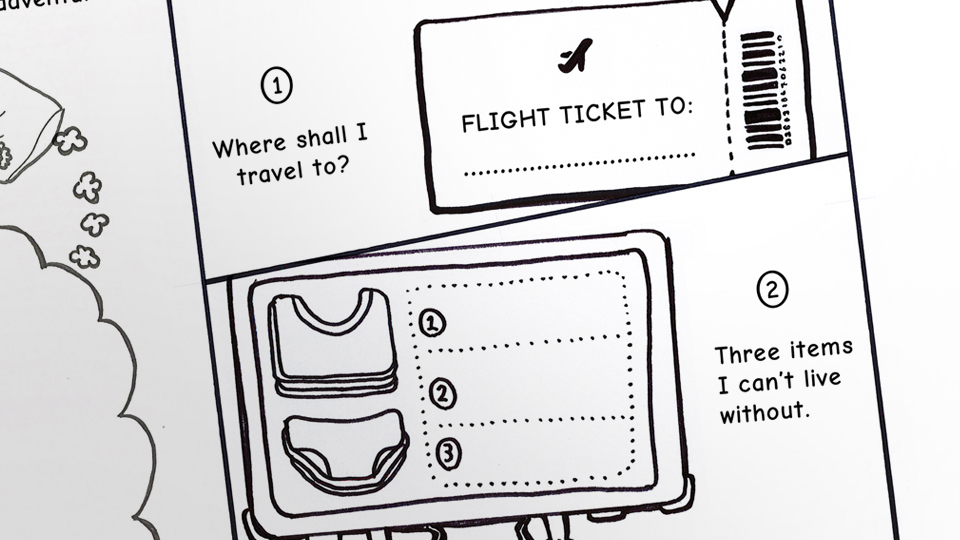 The more freedom we would give the kids, the more uncertainty we got about the storyline.

In terms of visual communication we faced some challenges as well. We wondered how we could communicate where to draw without giving too many limitations. Eventually we decided to use dotted lines to show where to write or draw. By considering the composition we also tried to guide the eyes so everything would be covered. 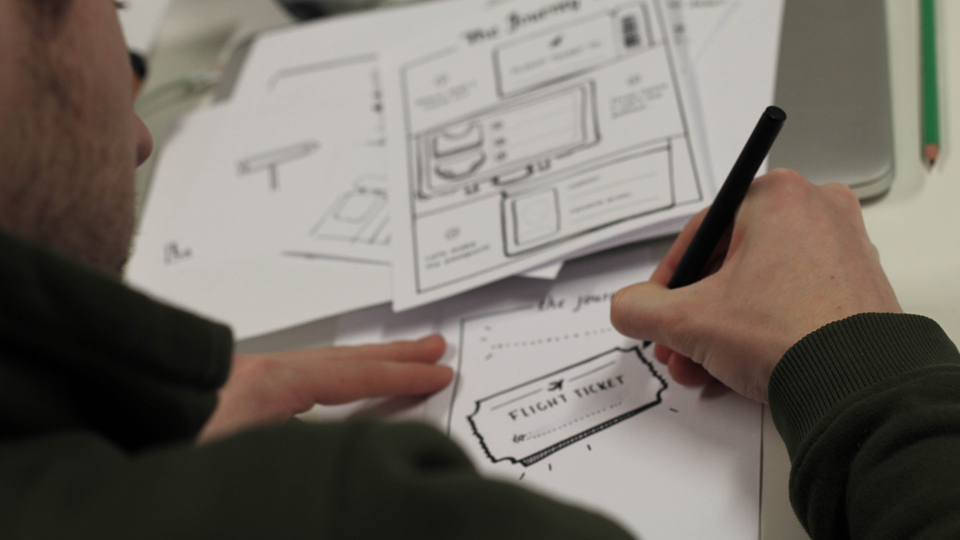 Finally, to decrease the amount of processing time for the teachers we decided to make the entire comic fit one A4 paper. To optimally use the space we made a foldable, double sided comic.

Because of the comic form, convincing the teachers and motivating the children was quite easy. We managed to get receive about twenty replies in just two days. This amount could have been much more if we had gotten a bit more time. We analyzed the comics individually, before looking at the bigger picture. 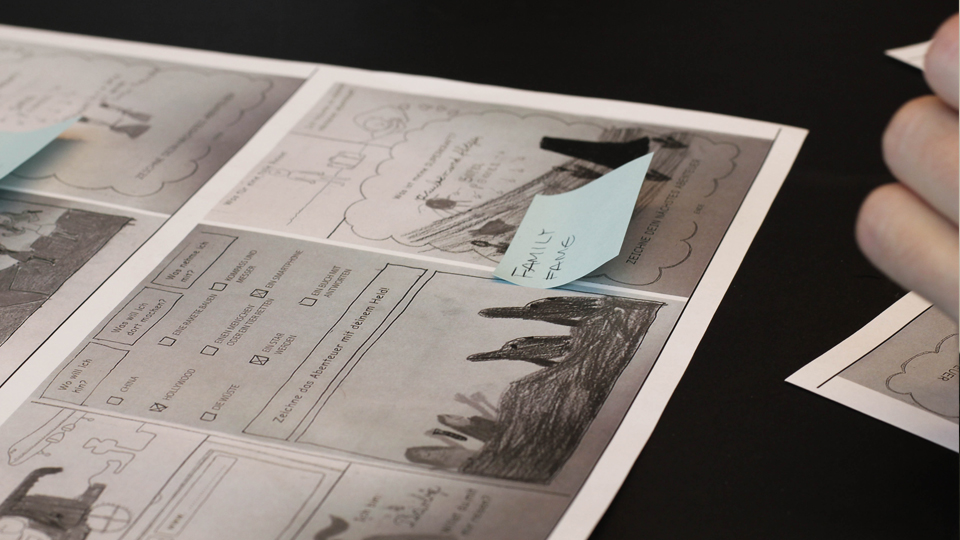 Because of the comic form, convincing the teachers and motivating the children was quite easy. We managed to get receive about twenty replies in just two days.

In general we could see two types of children. Some kids saw parents or relatives as their heros and wanted to travel the world with them. They generally just wanted to be happy and help other people. Another group of children wanted to become a celebrity. They wanted other people to look up to them.

Surprisingly the “smartphone” was picked as the number one thing they cannot live without. We also noticed the popularity of YouTube and YouTube stars.

We were quite surprised by some of the intelligent answers. One kid said: “The future is unpredictable” when he was asked to dream about his next adventure.

It is hard to judge whether the answers of the kids reflect their future lives.The fact that so many kids want to becoming a celebrity, does that represent today’s society or is it just related to their age? In any case, the comics informed and inspired us.

I think that using comics to collect ideas has much more potential than we uncovered. It can be useful for practical reasons. It is quick, easy to spread and to process. Besides that the data can be surprising and inspiring.

I think that using open-ended comics to collect ideas has much more potential than we uncovered.

Our approach worked especially well with kids who did not speak English but it would be interesting to also explore using open-ended comics with adults.