The goal of the project “Faceless Interaction” was to speculate on the role of the home in 2036 through a design fiction.

Our design fiction “Data Economy” explores how far people are willing to go to satisfy their individualistic hunger to consume by creating a tension between consumerism and data collection.

Today we often criticize companies for collecting and selling our personal data, but simultaneously we keep feeding the beast. In our design fiction, data collection for commercial purposes has been illegalized. However, to keep the high standard of living that society expects, people actively collect and sell their data to companies instead. Information has become the currency valued by the intimacy of the data and the buying power of the person.

Generate data by doing activities and use a collector to collect these. 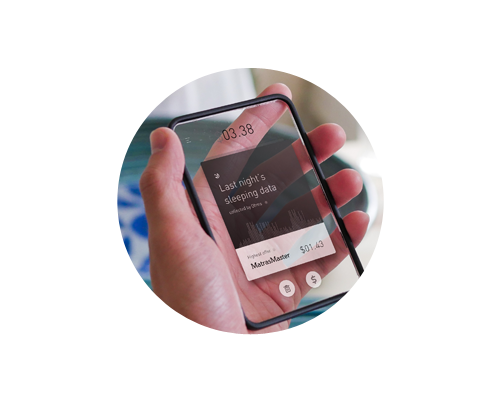 Receive an offer from a company and decide if it's worth giving up your privacy. Buy the suit you think you desperately need.

In the fiction, the home has become the last place that is totally safe and private, isolated from data stealers. It has become the shelter from the chaotic and dangerous outside world. A product representing this is Ohm’s biometric data collector which is used exclusively within the safety and comfort of the house. Ohm’s is a small device that connects to the user’s biometric sensors through his or her mouth. Through this connection, the data from sensors is transferred externally, enabling him to either delete or sell the data. Performing this action has become a daily ritual, similar to brushing teeth, for two main reasons. Firstly because keeping your most private data inside the sensors isn’t safe and secondly because people are constantly looking for sellable data. 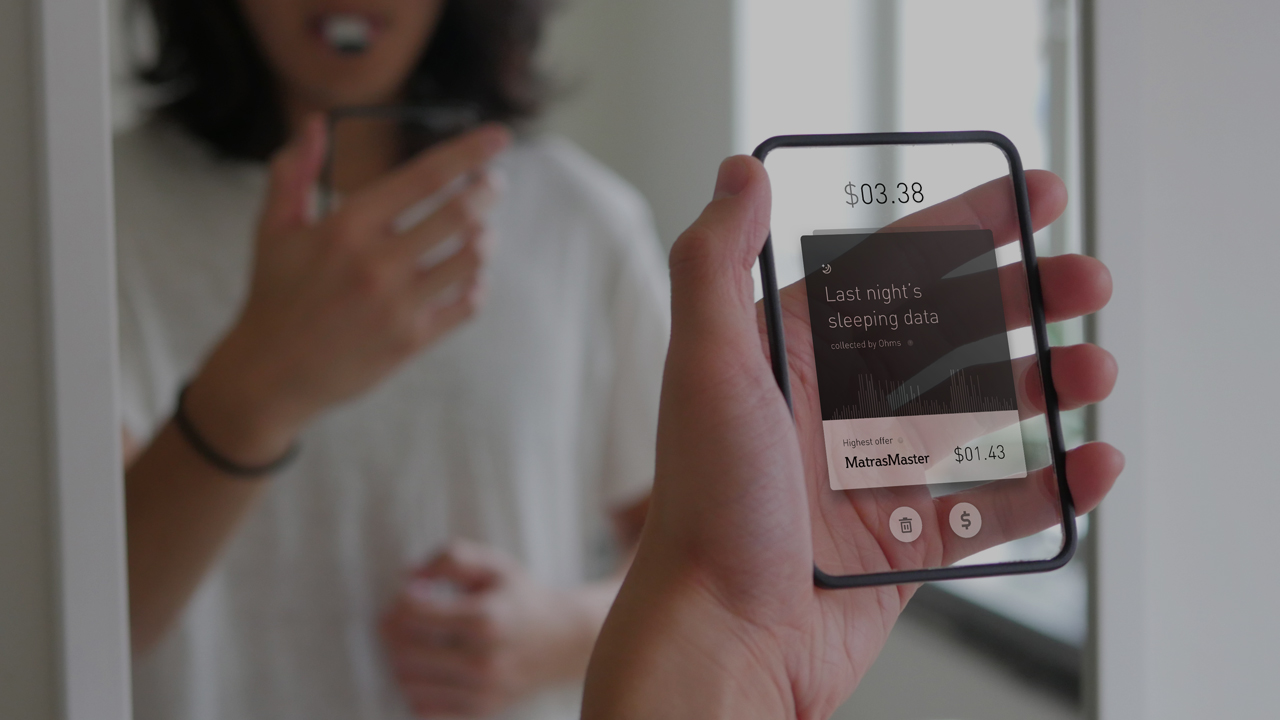 In short, our process was characterized by exploring and communicating design fictions through physical artifacts, ranging from a series of newspapers and a personal journal to a short film.

We recognized that because of the complex nature of the project there was a risk of drowning into ideas and thoughts. Physicalizing our thoughts helped us to prevent this. It provided material to build upon. 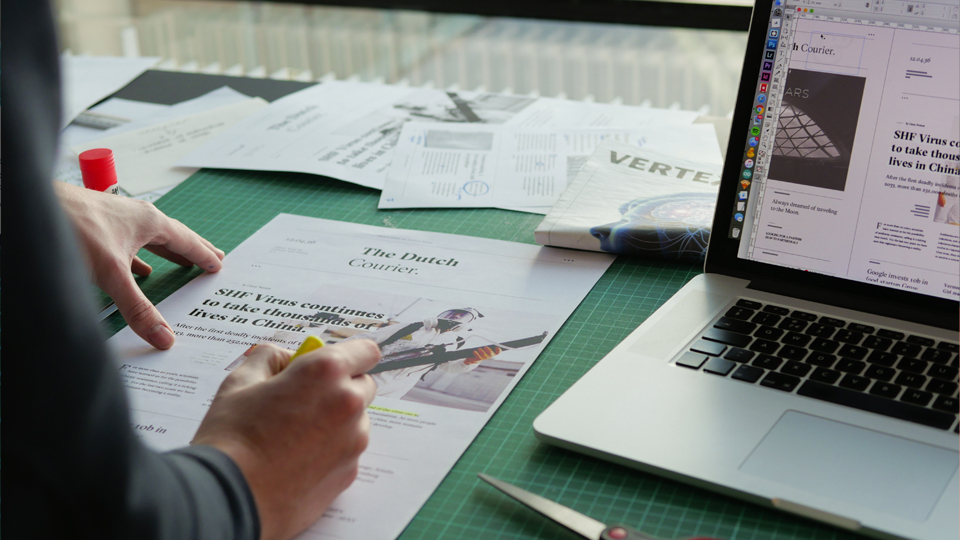 Early in the process we created a series of newspapers, as if published in a possible design fiction. We focused on how AI might impact the relations between people in the Netherlands of 2036. This artifact made us reflect on what other forms, apart from anthropomorphic, AI might take in the future. It also helped us to bring external people into our fictional world. During the first presentation, we also used the newspapers to tell a story of people reading these papers. It added depth to our fiction and it helped us to suck external tutors into our fictional world.

A concept building on this was called SuperData. In this concept we imagined the role of an A.I. to scan to web for all data shared online and to connect all the dots to create realistic simulations of past events. Through a social media experiment, in which we manually scanned the web for a random person’s social media information we were able to recreate a day in the life of Brenda surprisingly accurately. 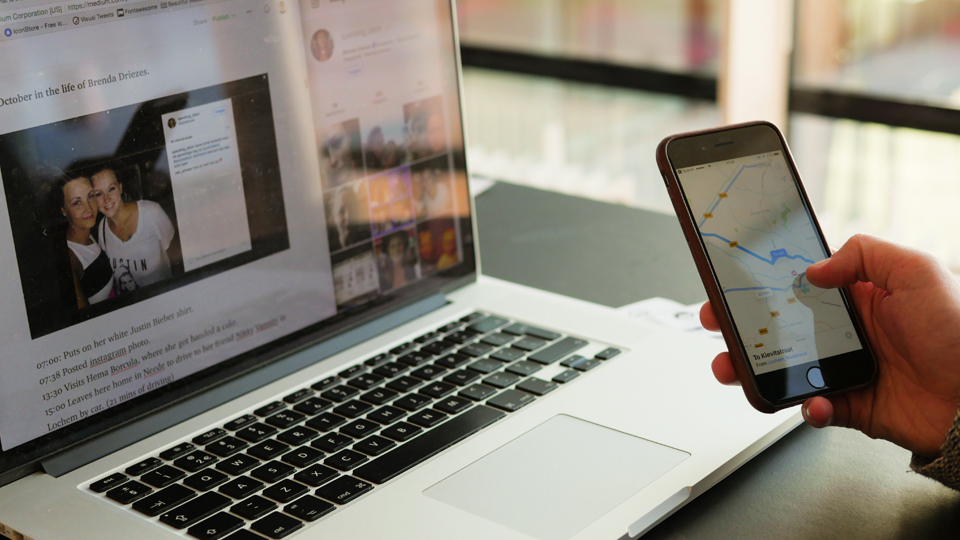 Inspired by our newspaper format we saw a potential of using SuperData in news reporting. Through ethnography with journalists from the Netherlands we learned about journalism. 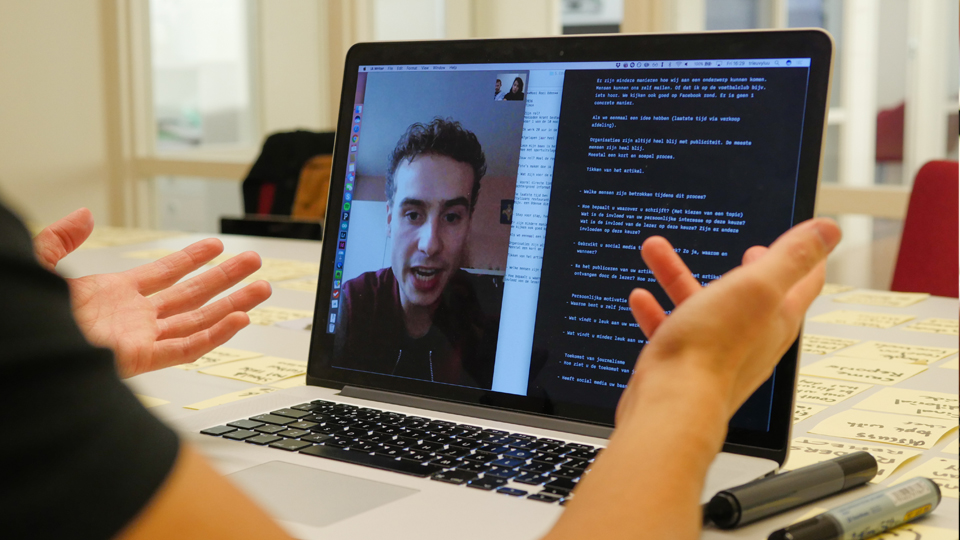 Being interested in data sharing and data collection we constructed a world in which people are wearing masks to stay anonymous. We prototyped this using Snapchat filters and eventually described this fiction through a tangible artifact, this time in the form of a personal journal written by a Dutch boy called Jesse. Again, we used storytelling to make our design fiction effectively come alive. 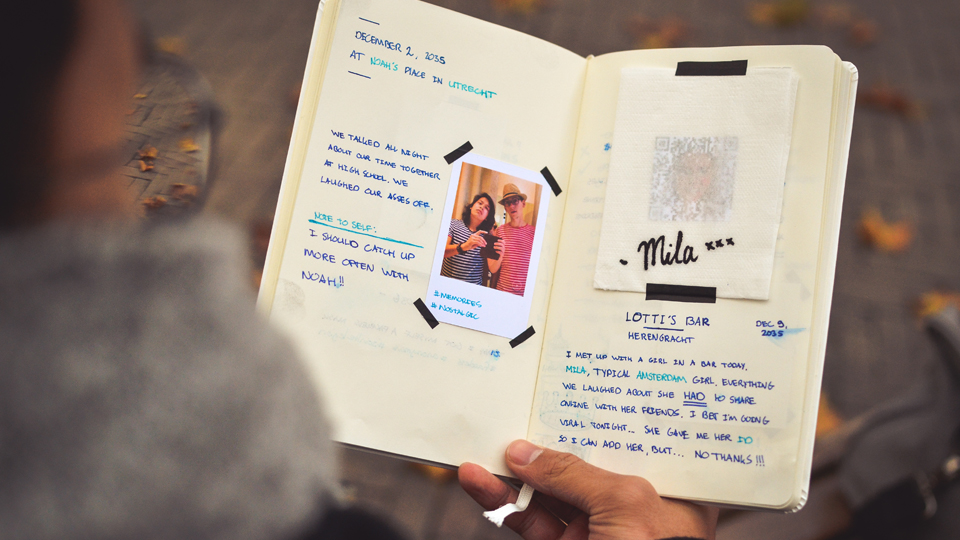 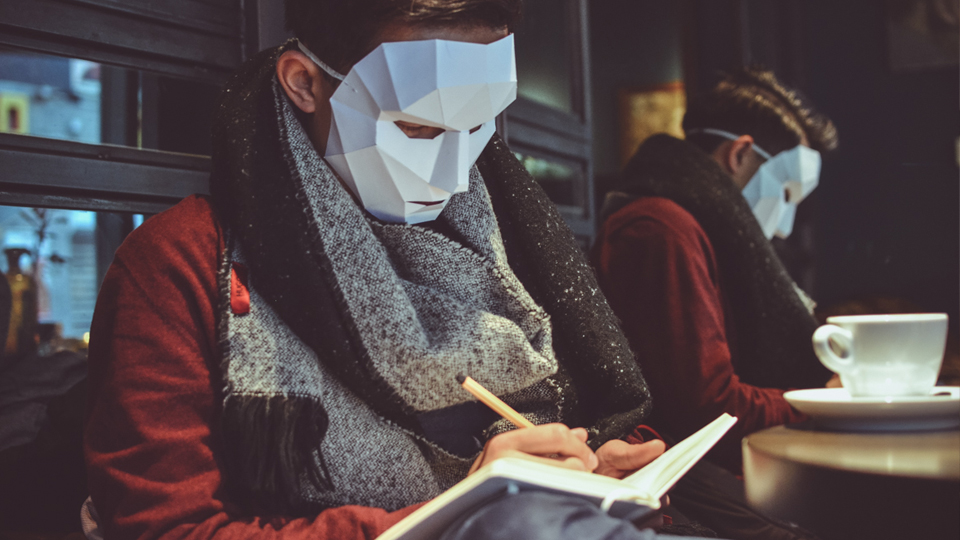 The story of Jesse made us construct our final design fiction, taking place two years after people started to wear masks. People aren’t literally wearing masks anymore, just metaphorically to hide themselves from other people who might steal their personal data. We wondered how this might impact the relations between people and described this through a series of stories called “Jesse’s Memoires”.

Once we had settled on our design fiction, we carefully considered how to tell it. Popular series like Black Mirror and Westworld made us see the power of film to communicate a possible future. Instead of creating a concept video to describe our concept, we had the ambition to create a short film, utilizing the power of visual storytelling.

Instead of creating a concept video to describe our concept, we had the ambition to create a short film, utilizing the power of visual storytelling. We realized that if the viewer empathizes with a character and looks at the world through his eyes, they have a fantastic opportunity to learn about themselves. A story can make the viewer reflect on the present. This goes hand in hand with the goal of speculative design. In our final video, we aimed to create empathy with our main protagonist by letting the viewer see the motives behind his actions. When Jesse unintentionally gets his hands on some highly valued data, we understand why he sells it. Empathy allows us to partially displace moral judgment. We don’t necessary approve, but we are still involved in the story.

Empathy allows us to partially displace moral judgment. We don’t necessary approve, but we are still involved in the story.

Our film itself doesn’t aim to pass judgment on the protagonist. After all, Jesse didn’t create this highly individualistic consumeristic society. He just stumbled on to it and is doing what he’s told. We wanted the viewer to realize that the real problem isn’t Jesse, but the society that creates and rewards a character like this. One important element in our story was the wallet, that informs the viewer how much balance Jesse has. Initially our goal was to create a futuristic UI that could live in 2036. However, the more we explored, the more we realized that to serve the story, the UI had to be understood in a split second. 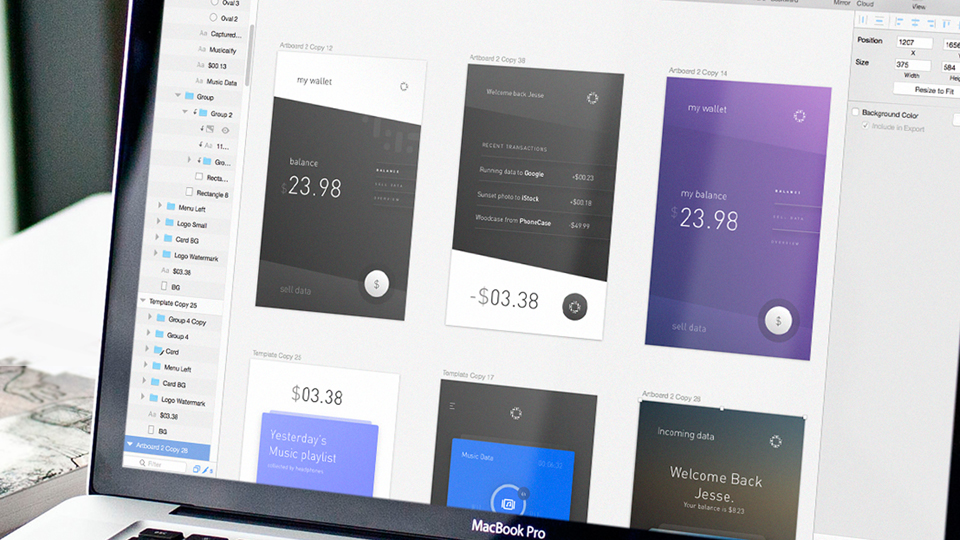 Our initial UI explorations were too polished and futuristic, distracting from the screen’s purpose.

Eventually, we decided to communicate the futuristic element through the transparency of the screen, instead of through the UI. This enabled the UI to be understood faster, adding to the understandability of our story. Our final UI relied quite heavily on post production work. This was quite a risk because neither of us had experience with After Effects.

Because this was the first time I used After Effects, I did many small try outs to optimize my workflow before starting the final production.

For example, I tried tracking and masking the screen before the shooting days. Even then, using a transparent screen turned out to be a time consuming decision in the end.