The week before Christmas week we decided to shoot the final concept video using a miniature environment. When I came back from the Christmas break, the box with material was waiting on my desk already! Setting up the environment and shooting the video was a lot of fun. Below is the resulting video which we made in just five days. In this post I will talk about how we did it.

Out of the box, the quality of the miniature material we had ordered was really high. We had also ordered a small driver, hoping that we could open up the cabin and place him inside. We had to take apart the entire machine in order the reach the cabin, but with success. The miniature driver fit perfectly in the miniature machine! We even managed to rotate the entire cabin so the driver faced the crane. Building the scenery was a lot of fun. We filled it up with soil, fake trees and turned branches we found outside into logs. 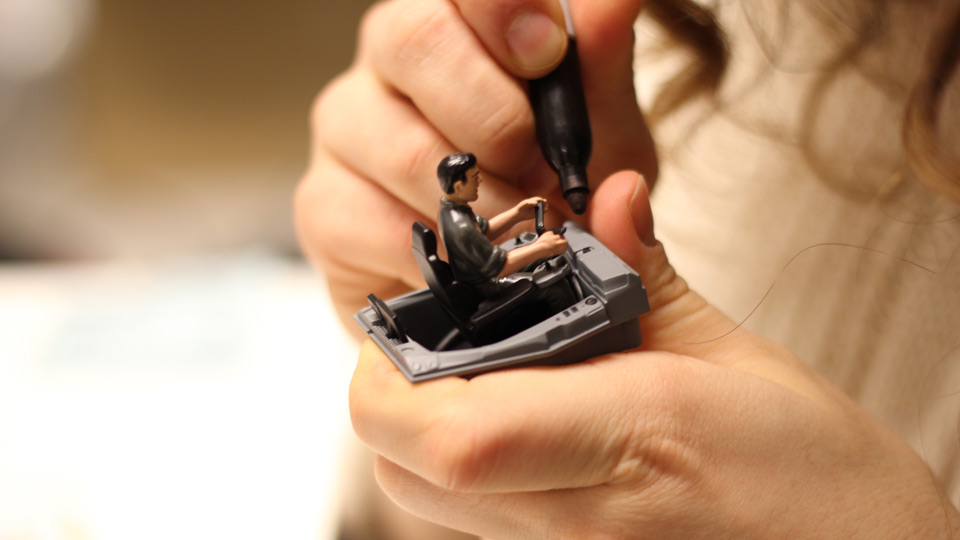 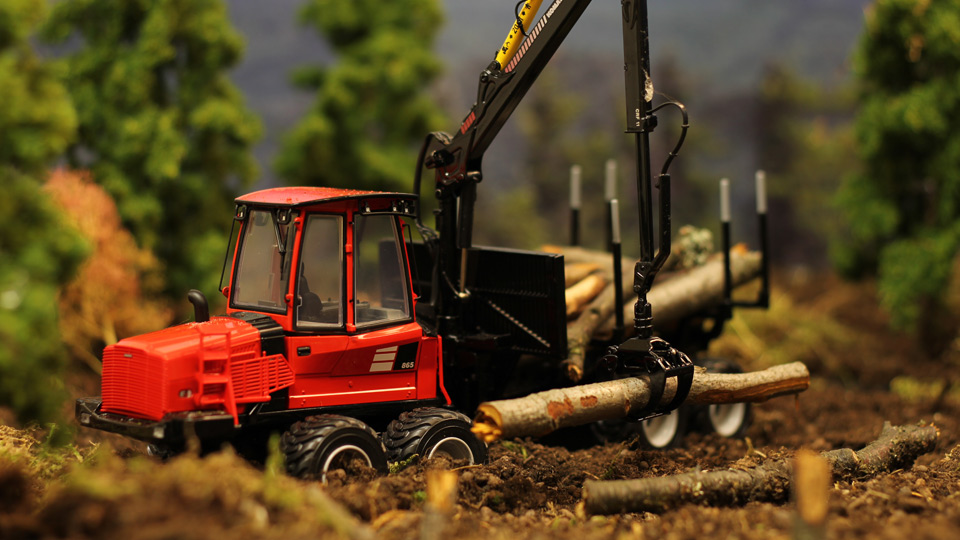 Merging the miniature and the real size world

To add realism, we aimed for shots in which the miniature and real size world were in the frame simultaneously. We decided to use a technique taken from a video of last year’s IxD students. They brilliantly show the reflection of the glass to add realism.

To add realism, we aimed for shots in which the miniature and real size world were in the frame simultaneously. We did made a quick test photo which convinced us the reflection effect could work.

The reflection effect required two layers of footage, synced and placed on top of each other. Because some of the environment would also be visible behind the driver, we had to add another layer of footage. We started shooting this footage and projected it behind the driver. It did not look crystal clear, but it was fine as a background. Then we recorded the driver facing the camera while following an imaginary crane with his eyes. Finally we recorded the reflection which showed the crane, based on the driver’s eye movements. On top of that we added a subtle detail: part of the metal frame holding the windows. This frame was cut out from a photo taken from the miniature forwarder. 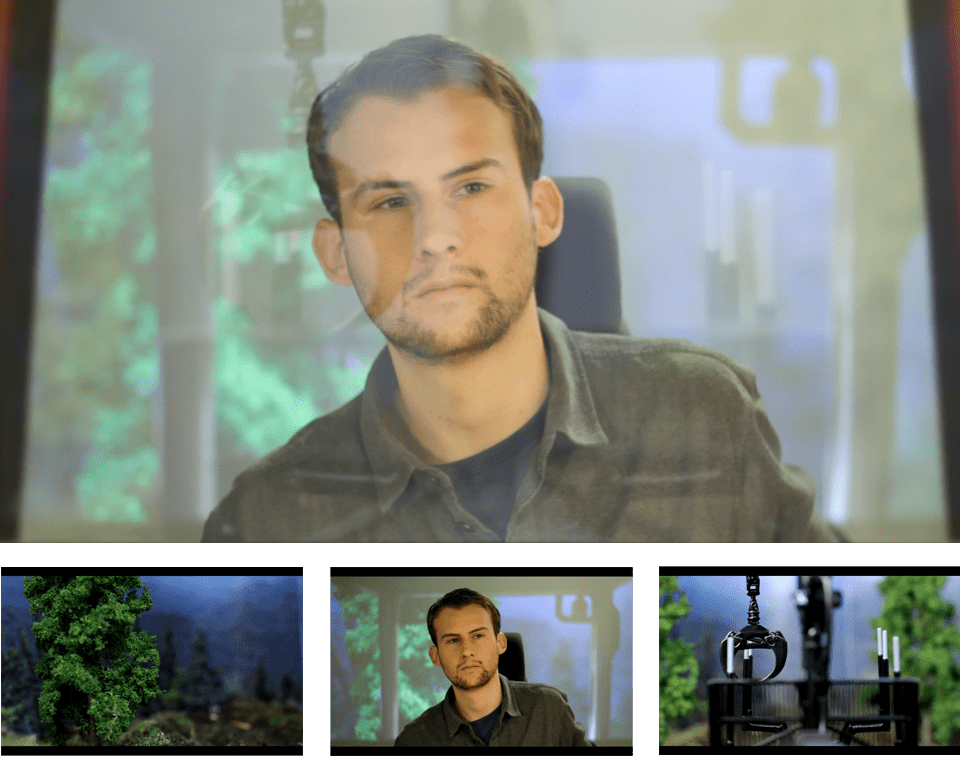 The final cabin shots contain four layers, shot in three sessions. For the second scene, we projected the footage from the first scene behind the driver. 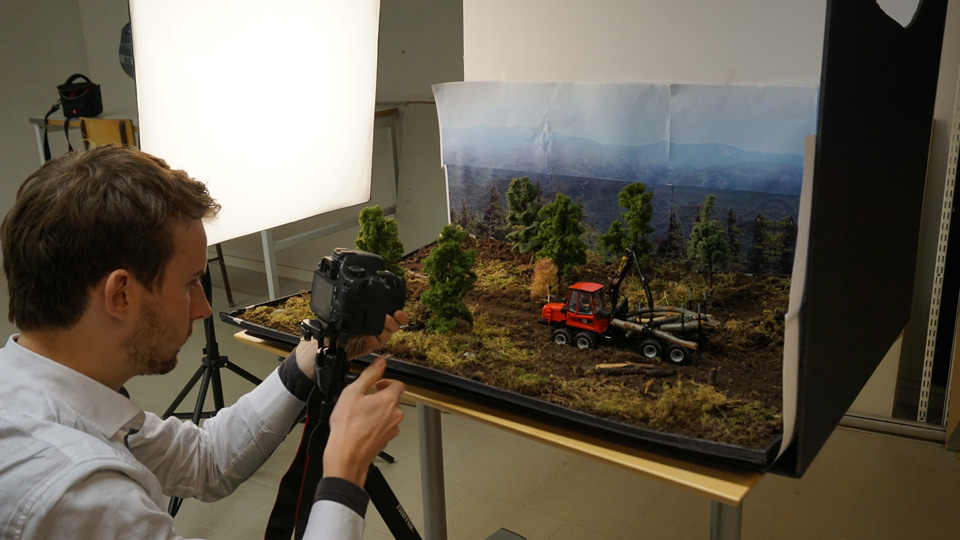 Photo by the awesome Aylin 🙂 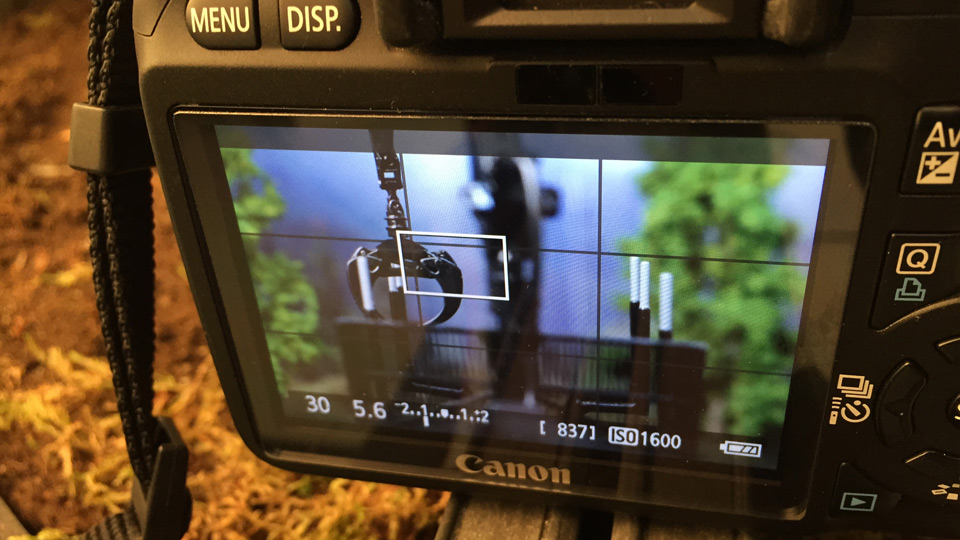 Editing during the process

What turned out extremely valuable was the fact I did rough edits after shooting a new scene. This enabled us to built upon the material we had already shot. For example, when shooting the in cabin shots of the control unit, I was simultaneously looking at the edited footage of the moving the crane. Thanks to this, I could ensure the movements of the control units matched the crane movements.

After four days of filming we had a total of 247 shots. I had never worked on such a large movie project before. Just the final editing took about 25 hours. The main challenge was the communicate the change in experience during the transition from manual stage to automated stage. The music really contributed to this. Happy about the results!